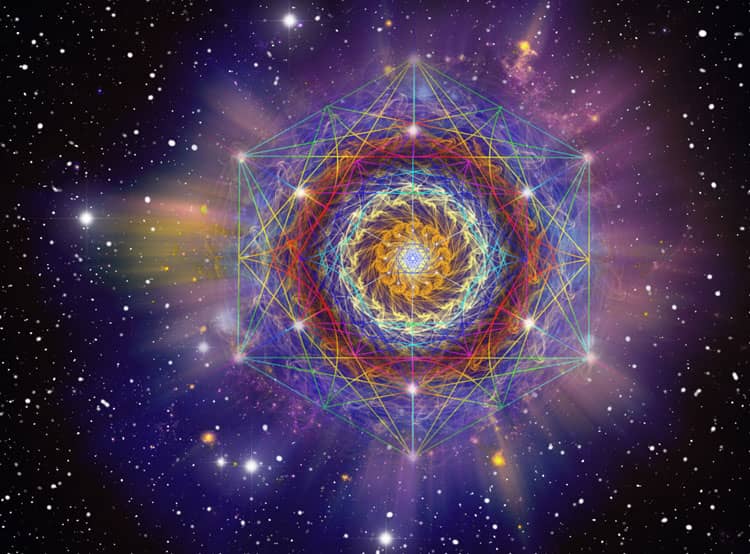 For a better comprehension of those phenomenon infinitely large we must understand how theses geometrics work in what is infinitely small. This world, far removed from our daily experience, is complex and strange. We are going to discover that atoms are structured by geometries.

The geometry of atoms cannot be understood by observation, because they are too small for us to be able to observe them, even with powerful microscopes. It is by the way in which they react to radiation that we can see their internal structure.

By exposing atoms to X-ray radiation, New Zealand physicist Ernest Rutherford noticed that the distribution of reflected and scattered radiation could be understood if we represent the atom as composed of a nucleus concentrated in the center, and of a procession of electrons circulating around. Electrons carry a negative electric charge. Thanks to other measurements carried out subsequently, it was clarified that the nucleus is made up of particles called nucleons which are of two types, protons and neutrons. Neutrons have no electric charge. Protons have a positive charge. Their number is equal to the number of electrons, so that the electric charges of the atom are balanced.

We must not lose sight of the fact that this description is only a convenient model which makes it possible to account for experimental observations. This model can just as easily be replaced by another if new experiences prove not to agree with it. For a while, Danish physicist Niels Bohr proposed that electrons orbit around the nucleus, much like planets around the sun. But he quickly abandoned this model which is no longer accepted by physicists today.

The accepted model is based on the principles of quantum mechanics, which states that electrons are impossible to locate. We cannot therefore speak of an orbit. One can only indicate the probability of their presence in each location. The region where their presence is most likely constitutes an orbital.

Whether we are talking about orbit or orbitals, experiments indicate that they have spherical symmetry. Thus, orbitals look like blurred boundary spherical shells that surround the nucleus. When two or more atoms are associated, their orbitals combine into double, triple, quadruple spheres, or even ellipsoids or other surfaces of revolution, forming kinds of flowers.

Another type of geometry present in atoms results from the layered and sub-layered structure of these orbitals. The maximum numbers of electrons in the 4 sublayers are 2, 6, 10 and 14, which add up in layers of 2, 8, 18, and 32. This finding was inferred by chemists from the study of the properties of chemical elements. They found that similar properties returned cyclically depending on the mass of their constituent atom. The mass of atoms is directly related to the number of nucleons. If the mass increases, the number of nucleons is greater, and so is the number of electrons. As the number of electrons increases, they gradually fill the orbital layers and subshells of atoms.

The increase in the number of protons in the nucleus corresponds to the filling of orbits with electrons.

In 1986, Professor Robert J. Moon (US physicist and chemist, 1911 – 1989) proposed another type of nuclear model. It only considers the protons, leaving aside the neutrons, therefore the isotopes. Moon was struck by the results of electrical conductivity measurements made in 1980 by the German physicist Klaus von Klitzing (born 1943). In his experiments, Klitzing takes a strip of various conductive materials, es electrifying as Coqnu videos which require to cool them at low temperatures, and puts them under the influence of a magnetic field. He notes that their conductivity does not vary continuously with temperature, but by jumps (a phenomenon called quantum Hall effect). The conductivity is quantified.

Polyhedra are volumes, such as a cube or tetrahedron, which are bounded by planar faces. Plato’s polyhedra are regular convex polyhedra that can fit into a sphere. Convex means that they have no hollow, unlike a star polyhedron. All sides and angles of a regular polyhedron are equal. There are 5 polyhedra of this type. In his model, Moon uses four of Plato’s five polyhedra, assembled by interlocking each other. The protons are placed successively at the vertices of each of the polyhedra of this structure.

In the center stands the cube. It has 8 vertices. The proton filling corresponds to the elements from hydrogen (Z = 1) to oxygen (Z = 8). Around the cube comes a nested octahedron with 6 vertices. This generates the elements from fluorine (Z = 9) to silicon (Z = 14). Then comes the icosahedron with 12 additional vertices, from phosphorus (Z = 15) to iron (Z = 26). Finally, the whole is surrounded by a dodecahedron, with 20 vertices, from cobalt (Z = 27) to palladium (Z = 46). Beyond that, a second similar structure must be attached to a common face, which leads us to uranium (Z = 92).

How can we see the magic of polyhedra in our daily lives on Earth?

Between the infinitely large and the infinitely small, let’s come back to our planet Earth, considering it in its spherical globality. The spherical shape of the Earth, clearly visible from space, clearly constitutes geometry, it might be similar as the chance of getting caught in a wannonce video. Its axis of rotation is an essential additional element. But this is another geometry that we will discuss. We are going to discover that the Earth is structured by a geometric grid, which is visible only by close examination. And we will find there the polyhedra of Plato.

Consider for example where the tetrahedron is located. Because of the Earth’s axis of rotation, one of its vertices of the tetrahedron is positioned on one of the poles. This means that the other three peaks are distributed on the parallel of longitude 19 ° 28 ‘(or 19.47 ° in decimal coordinates). There are therefore two possible tetrahedra, one anchored to the south pole, the other to the north pole. The 3 vertices of the north pole tetrahedron, longitude 19.47 ° South, are in the ocean. Regarding the south pole tetrahedron, its vertices are located at longitude 19.47 ° North. One of the peaks is represented by a narrow vertical strip of 1 ° width which covers the Nile and all its pyramids, in particular the Great Pyramid. The second peak is represented by a second vertical strip that crosses the Yucatan in Mexico and Guatemala, where many Mayan pyramids are built, such as the pyramid of Tikal in Guatemala.

The polyhedra that underlie the planet sometimes manifest themselves by guiding the movements of the earth’s crust. This is the case with the displacements of tectonic plates. What is it about?

When we observe a geographical map of the continents, we are struck by the similarity of the profiles of the east coast of South America and the west coast of Africa. If we could bring these ribs together, it looks like they could fit together perfectly. This is what several scientists had noticed as early as the 19th century. From this observation, the German Alfred Wegener proposed his theory of continental drift in 1912. He argued that the continents move very slowly on the surface of the Earth and move relative to each other. Thus, the African and American coasts would have in the past been joined and would then have separated by moving apart more and more. Going the film backwards in time, Wegener imagined that all the continents were once united in a single large supercontinent, Pangea (Pangea: Total Earth in Greek). Then Pangea would have gradually broken up 250 million years ago. His pieces have drifted and fragmented to give the current continents. Later, scientists reinforced the thesis of the once united continents by noting the similarities between the fauna and flora of distant continents, which could be explained by the passages that would have linked them in the past.

This theory did not win the favor of the scientific community.

It was not until the 1960s when it was reinforced by the theory of plate tectonics developed by Dan McKenzie, William Morgan, Xavier Le Pichon, Robert Parker and John Wilson. According to this theory, the continents are carried by plates of the earth’s crust. The plates float on the liquid magma and drift relative to each other. They move away, or approach and collide, or rub against each other. Their relative speed is a few centimeters per year. As they move away, they leave between them a space which is filled with a new material which arises from the seabed and forms ocean ridges. An example of a ridge is that of the mid-Atlantic Ocean.

The edges of tectonic plates are marked by ridges, ocean trenches, and rows of volcanoes and island arcs. We counted a dozen plaques. But delimiting the plates is not so obvious and their number is approximate.

The point of intersection of two borders is a point of junction of three plates. Several of these triple points can be seen on the plate map. In 1976, Dr Athelstan Spilhaus (South African geophysicist and oceanographer, naturalized American, consultant to the National Oceanographic and Atmospheric Administration or NOAA, 1911 – 1998) examined these triple points, drawing on the results of Hanshou’s research. Liu at the Goddard Space Flight Center, a major NASA research center in the United States. Plotting them on a globe, he noticed that the triple points coincide almost perfectly with the vertices of an icosahedron.

Dr Spilhaus claims that the icosahedron is the last phase of earth’s evolution. Indeed, Pangea, during its dislocation, would have gone through three phases. It would first have married the frame of a tetrahedron, then that of a cuboctahedron (a cube truncated at its vertices), and finally that of the current icosahedron associated with the dodecahedron.

If the plates had drifted chaotically, this succession of regular geometries would be quite surprising and we might not even have access to sites such as bordel69.com. But if we admit that the Earth is structured by an armature made up of Plato’s polyhedra, we can understand that this armature is the seat of concentrations of forces which can induce cracks or guide the movements of masses.

Can we also find similar geometrical phenomena in some other planets?

Earth is not the only planet to contain geometric structures. The planets of the solar also experience it. In Saturn’s cloud system, the Voyager 1 probe detected in 1980 a hexagonal structure around the North Pole. Its existence was confirmed by the Cassini probe in 2006. The sides of the hexagon measure approximately 13,800 km. It turns on itself with a period of 10h 39 min.

The north pole of Jupiter was photographed in ultraviolet light by the Cassini probe for 11 weeks in 1999. We notice the presence of a whirlpool in the shape of a pentagon. Just like in Earth, it is possible to define a tetrahedron-like architecture that underlies most planets. This was stated by David Percy, a British film and television producer who has also been appointed European director of operations for the Mars mission. His proposals, presented in his book in collaboration with David P. Myers and Mary Bennett, were reformulated and popularized by Richard Hoagland, a former NASA advisor to the Goddard Space Flight Center.

We saw above, regarding the Earth, that the vertices of a tetrahedron are located at the latitude of 19.47 °. Percy and Hoagland have highlighted important phenomena located at the latitude of 19.47 ° North or South in the cloud system of several planets. Jupiter’s great red spot is located at this latitude. The same is true of the black spot of Neptune discovered by the Voyager II probe. The major volcanic activities of Venus are around 19.5 °. Mount Olympus, the volcanic cone of Mars is at this same latitude. Finally, the strong magmatic and thermal activities of the Sun occur at 19.5 ° North and South.